How do we encourage users to check the votes to delete?

Every now and then I check the pending delete votes (note: requires quite a lot of reputation to view), to see if there are any posts on there that require deletion (ditto undeletion, but deletion is more common). Then I check to see if I agree, and cast my delete vote if I do. Recently, though, I nearly always end up getting told "You have already voted to delete this post"; not only are the votes-to-delete staying unresolved for a long time, but so long that I've forgotten I cast my own!

Certainly, bad posts do get deleted on this site, but there are only really two common ways in which it happens: a) the post gets flagged as VLQ, typically due to an intentional spec noncompliance (which places it into the low quality queue and strongly increases the chance that enough users see it that it'll get the delete votes), or b) a diamond moderator sees the post and deletes it unilaterally. These are both worthy methods, but they don't handle the entirety of the content on the site:

Now, the reasoning here concludes that ideally, if it worked, we would be using a third method (indeed, the intended one): three users with enough reputation to cast delete votes do so. The problem is, you need multiple votes on the same post to delete it, and without users actually checking posts with pending delete votes, the posts are unlikely to gather the votes in question. There isn't a review queue for delete votes, like there is for close votes. As it is, though, our current policy basically concedes that this method doesn't work (and indeed, it doesn't work in practice). However, the problem seems relatively fixable; we merely need to inform high-reputation users of the existence of delete votes. As linked earlier (but I'll repeat the link to make it easier to find), there's a page that does this (plus another one for delete votes here on Meta); it's just that nobody but me seems to be checking it. Is there a way in which we can encourage users to check this page more often (like they seem to check the review queue)?

Well, just pointing out that it exists certainly helps. Based on the comments on this question, it's fair to say many users with access to the tools didn't even know they were there. This is more a failing of the SE design than a site-specific issue - the only link to that page is on the review queue page (and I personally never even realized that it was a link, much less clicked on it). 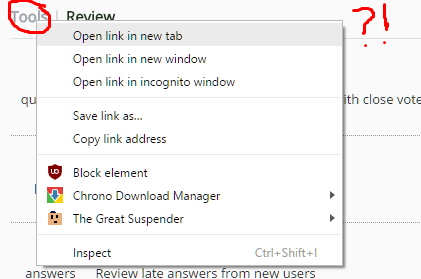 I've opened a feature request on Meta.SE to make this page more visible via adding a button on the omnibar.

The review queue, the deletions page, keeping the chat sane (?), welcoming new users to the site, looking through the Sandbox, pointing people to the standard loopholes, asking clarifying questions of new question writers (in a non-confrontational way).

These are all ways that experienced members of the site can help make the site better. We should maintain a meta post full of such things, and point people to it every now and again.

33
Definitive policy about answers not meeting the challenge specification

18
Moderation: a call to action
11
How can new users use the Sandbox?
70
Let's go on a mission
6
Invalid answers in the review queue, but OP hasn't had time to fix it
16
How can we improve the quality of new users' challenges?
7
How much information can 10k+ users share?