PCG has potential, but lacks direction

Is going to end up getting closed, based on the close vote rate I see, despite not only meeting every single objective criteria in both tag descriptions...

... but also, based on tone, quality, and number of answers, clearly providing a fun and entertaining challenge for at least a handful of people which, if I'm not mistaken, is the entire point of PCG.

But why was it closed? Because there are a handful of people here that don't particularly enjoy "popularity contests". That's totally fine, those opinions are reasonable and valid as far as opinions go, but "I don't like popularity contests" is not a valid close reason, and arbitrarily slapping on a nonsensical "too-broad" or "not-objective" (when both are categorically false for this question) doesn't disguise that reason.

Further, not one, but two people felt that it was both appropriate and productive to go down and downvote every single answer on that question. Whether you like a question or not, punishing every answerer is not appropriate. The type of user who does this is the type of user that PCG has catered to through its poorly defined close reasons, tags, and philosophies.

PCG is a brilliant idea on paper, but its execution has left it one of the desolate corners of the SE network. Granted its still in beta, but it doesn't seem to be progressing like it should.

Personally, I'm going to find enjoyable programming puzzles elsewhere. Not in an "I'm taking my ball and going home" kind of way, but in a "PCG isn't actually all that fun or interesting" kind of way. The problem isn't the overall quality of challenges that people post; the problem is that this site is either unattractive or downright repelling because:

In any case, I do have some potential ideas for more organized close reasons and some other general suggestions, but after seeing other people get turned away from this site, and finally experiencing it for myself (and the -2 downvotes on every answer -- you guys should be ashamed, and hey moderators, jump in and adjust those users privileges accordingly, throw it down for a change -- look at the good natured fun and creativity present in every answer on that question, and convince yourself that the PCG philosophy is to stop that in the act, and to create an environment where users downvote those answers -- you have a problem that you need to fix if this site ever hopes to get out of beta), I think that my PCG attention span ends at roughly the same point as the period at the end of this sentence.

Not much traffic on the site, but our small community is happy and thriving, and when a new question is posted it's almost always high-quality and enjoyable. 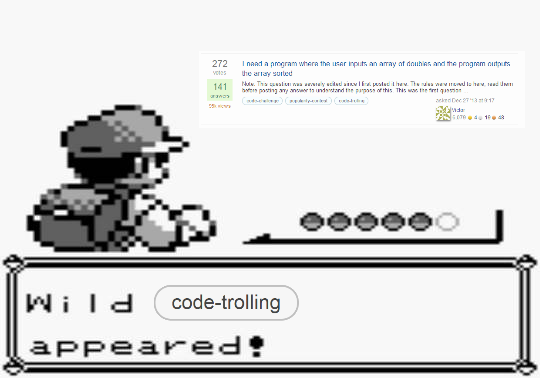 Systematic invasion and sneak attack of the site by code-trolling. Within that one fateful month, the site was devastated, with tons and tons of code-trolling trash posts bombarding the site and new, uncomprehending users blindly upvoting and answering them.

In early February, code-trolling was almost completely under control, and had brought out the next ugly beast: popularity-contest. Not the tag itself, but the low quality questions, the "I'll just slap on pop-contest and call it a day" type.

So we began a war on popularity contest, and it continues today.

To address your points in order, now:

I think you just need to calm down, step away from the computer for a few hours, and let this cool down for a while. Maybe go outside. It'll help.

First, thank you for voicing your opinion. This is the way in which our community grows, by having its users express what they want and don't want to see here.

Second, a community is ever-evolving, and its expectations of what fits the site or doesn't likewise is. In the early days of the site (2011 to 2012), popularity contest questions were not considered acceptable. But since then, such questions have gained popularity (har har), especially with the introduction of code trolling. So whatever opinions I have about popularity contests (and they are well known and frequently articulated), there is no turning back the clock.

Third, there is an important principle about moderation at Stack Exchange. Moderators are supposed to enforce the will of the community, not their own personal opinions and agenda. (Though, of course, moderators are also members of the community and are entitled to have an opinion too.) Furthermore, they are supposed to be generally hands-off, and not get involved in close/delete votes (leaving them to high-rep users instead) unless a post is egregiously off-topic (e.g., "send me teh codez") or offensive. This is all detailed in A Theory of Moderation, which all moderators are expected to abide by:

Moderators do not have the ability to see who downvoted which post. Serial downvoters (and serial upvoters) are detected by the system automatically on a periodic basis and their votes will be nullified automatically. So such actions have very little long-term effect.

You have clearly thought a great deal about the mechanics of the site, and I appreciate your sharing of these thoughts. Stack Exchange might not be the right venue for implementing these ideas, and I understand your frustration and wish to be elsewhere. I wish you the best, wherever your Internet travels take your next.

31
What does Code Golf's progress look like right now?
-4
Delete all code-trolling questions
3
Why was the analog clock popularity-contest question deleted?
0
I can't understand why my quesiton was closed

18
Moderation: a call to action
8
The new user dilemma
10
Does P&CG need a new moderator?
2
Why is PCG meta not available in HTTPS?
17
High-rep hammers hamper high-rep humans
88
We're not a Q&A site. But what should be done about it?
22
Should there be a migration path from PPCG to Stack Overflow?
1
Is it OK to delete old answers?