Context: Given that Vyxal is roughly under a month away from being selected for LYAL (at the time of posting, my calculations place it as being 1-2 LYALs away), I figured I'd write this so it can garner feedback and hopefully approval in time.

Over in the Vyxal chat room, we have a neat little bot called Vyxal Bot that does all sorts of cool things like post github events (e.g PRs, issues and so on), allow for funny moments in chat (example) and other stuff. These commands obviously are off-topic for TNB in general, and they would be disabled during LYAL.

The command that would remain active is !!/run - this allows you to run Vyxal Code from chat messages, something that would be helpful during the Vyxal LYAL when it happens: 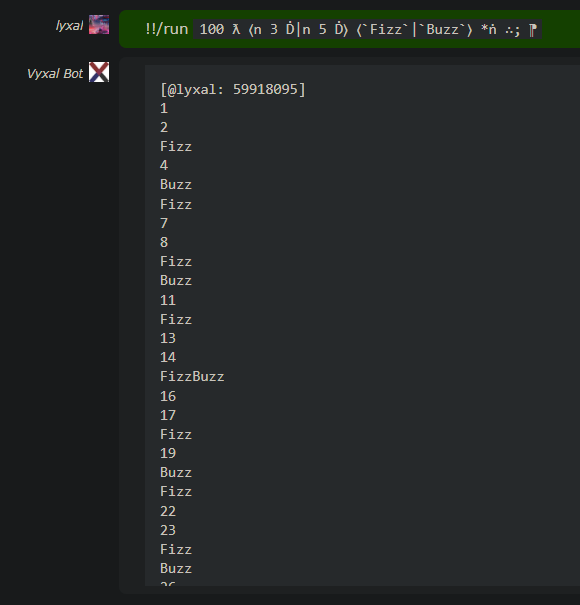 hyper-neutrino has previously mentioned they'd be able to write a minimised version of the bot that makes sure only the !!/run command can be used, so there wouldn't be any chance of abuse of other commands. The only problem could be the initial wave of people mucking around with the run command to figure out how it works, as well as people potentially spamming commands. However, those could just be moved to the bakery or trash.

The bot would remain in the room for the duration of the LYAL event, which IIRC is a maximum of 24 hours, so it'd be back in the Vyxal chat after the learning finished (we need it for our own purposes after all lol).

So what do y'all think? Vyxal Bot in TNB for Vyxal LYAL when it happens?

So long as the bot is only in the room during the event, and that it only speaks when spoken to*, I think having the bot will be a useful resource for the LYAL event, and should be let into the room.

*Note that I'm not restricting it to only !!/run, only to commands that require someone to ping the bot specifically to get it to chat. For example, if the bot has any commands that provide documentation for a given Vyxal command, those would also be helpful during the event, so should be allowed. If this results in noise, the fault isn't entirely on the bot, and we can ask the users making the noise to stop and trash the messages if need be.

Not the answer you're looking for? Browse other questions tagged discussion chat chat-events .

18
Can I post a cooperative challenge where there isn't a single winner?
13
We Built a Programming Language... right?
48
We need to talk about Chat
17
Let's talk about chat again
2
Kicked from TNB (by a bot) for "inappropriate content" and have some questions about it
15
If code fails to compile, but runs anyway, does that count as executing without error?
4
Would a golfing tips chat room be a good idea?
21
Language of the Month for April 2018: Brain-Flak
19
Language of the month for October 2020: Husk
9
Chat Event: Learn-a-lang