Does randomization count as encryption or hashing?

Inspired from this question, I decided to submit an interweaved program (now deleted) written in Seed. This program uses a Mersenne twister to generate programs by entering a program that consists of two numbers. Using these two numbers, Seed generates a Befunge program. This is created by the randomization of the seed. After looking up what the definition was for cryptography and hashing I'm not really sure if it counts as hashing or cryptography. Seed only uses the randomization of the seed, but does not change anything else to the data received from the seed. 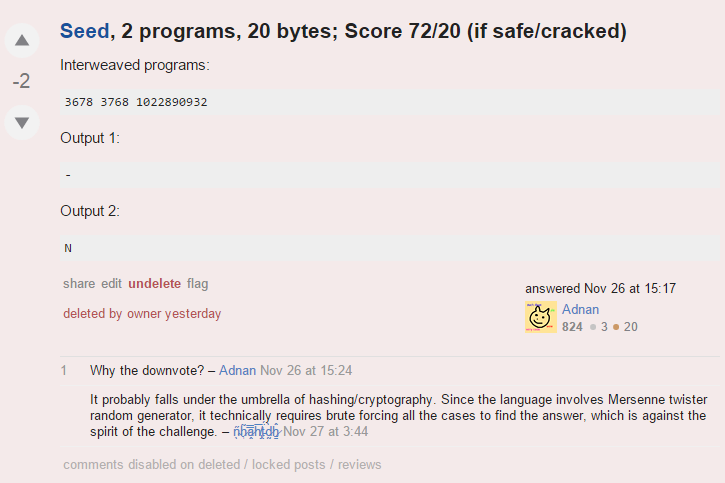 It's more about the spirit of the rules.

Cops and robbers have had a problem of cop submissions that just do convoluted arithmetic. They are not solved by thinking about code, but by thinking numbers. This is boring because the structure of the code and language often matters little, and the robber is just trying to find the pre-image to some arithmetical function. With a convoluted enough operation, there's nothing better to do that brute-force search all possibilities.

This is what the rule is trying to avoid when it bans hashing or cryptography -- built ins that just give you a mangling function. Random number generators are much the same. Even if those were specifically banned though, there are many ways to home-brew something similar. We've seen lots of them, and feel boring and samey.

So, yes, the rules are vague and many people have "won" using the same idea. Even if your submission was legal, it may draw downvotes because it's cheap. It's the question's fault though that such cheap answers are a good path to winning by the rules as written.

Note that many top-voted cops give an interesting challenge that is meant to be cracked in a fun way, rather than trying to be uncrackable. Maybe it's best to think of cops as puzzles posed rather than code made to win an adversarial game.

In cryptography, encryption is the process of encoding messages or information in such a way that only authorized parties can read it.

Typically how this works is, you encrypt some data using a key, pass the encrypted data to the other party, and they decrypt it with a key (which may or may not be the same key, depending on if the encryption algorithm uses symmetric or asymmetric keys). The defining feature of encryption is, without the decryption key, a third party would not be able to retrieve the original data. Some algorithms are more secure than others, but that's not a relevant discussion.

A hash function is any function that can be used to map data of arbitrary size to data of fixed size.

As for the challenge in question, though submitting two interwoven Seed programs is not explicitly against the rules, some might interpret it as being against the spirit of the challenge, because it involves an RNG. That's barely relevant though, because Seed programs are wholly deterministic. Though the crack would likely come about through the use of brute force, I don't see a problem with that, as the brute forcing is not unbounded; there are a finite number of pairs of valid Seed programs that could be formed from your entry. I suspect the downvotes were from ignorance; people saw "RNG" in the language description and hastily downvoted without reading further and seeing that Seed is actually deterministic.

412
Loopholes that are forbidden by default
23
Add randomization in CnR posts as a loophole?

18
Does desmos.com count as a programming language?
12
Does using SMBF count as a cheating quine?
1
Obfuscation/Encryption question
37
We need a new proper quine definition
18
Questions that ask for artifacts or witnesses
1
Does U+007F contribute to a byte count?
5
Cleaning up the vague [function] tag
23
CGCC Blog Post #4: Impact of CGCC on Code Golf