We're not a Q&A site. But what should be done about it?

It has come up several times recently (more than usual) that PPCG differs from most of the other Stack Exchange sites in that it's not a Q&A site. People don't come here to ask a question because they have a problem, people come here to solve recreational challenges. The most valuable contribution to this site isn't people using their free time to solve others' problems, but using their free time to think up interesting challenges for the enjoyment of others. This entire post rests on the premise that we are not by any definition a Q&A site. If you want to contest that, please start a separate meta post.

So the actual problem is that the entire site (and more importantly the onboarding experience for new users who don't look past all the standard texts and don't know about PPCG's "special" role in the SE network) is saying "this is a Q&A site, get help here if you have a problem and show what you've tried". I think that's why the "beta" label is more appropriate here than on any other ungraduated site. And given recent developments maybe it's time we actually talked about where those discrepancies are to see if something could be done about them.

Of course, every time someone brings up the "we're not a Q&A site discussion" that is always accompanied with "but SE isn't going to pour any dev hours into custom code for PPCG, so tough luck". And while it's probably true that we won't get large amounts of customisation unless this community becomes a seriously big player, there are some simple things like changing some standard texts that might not be much effort and would already greatly help improve the overall experience here. Plus, SE most definitely isn't going to spend any time on features that were never requested because we thought they wouldn't ever implement them anyway.

So the idea of this post is to discuss how the site could be improved for the way PPCG as a community uses it, and in terms of how we're not a Q&A site. The idea is to do this in the form of potential feature requests. Each answer should be one suggestion for an improvement to the site. These can be discussed in the comments and if they get some support they can get their own feature-request which can then be linked from here. By doing this "staging process" for feature requests relating to the Q&A issue, I hope that this post can act as a hub for them and we can post them in a more organised/coordinated fashion that increases the chances of us getting any of these things at some point in the future.

Note that this isn't about sorting out the gritty details of every single potential feature request like specific phrases and things like that. Those can be discussed when a corresponding feature request is posted later on. This is about suggesting which parts of the site could be improved (and roughly how), as a community brainstorming session, so we can see how they might work together and focus on pushing for the feature requests that seem most promising and urgent.

Please do not repost things that have already been asked about on meta. Existing feature requests related to the Q&A issue include:

Include Top Askers in tag wiki side panel

Currently the side panel in each tag wiki page shows a list of Top Answerers, which for a Q&A site makes perfect sense. However, here it would be good to also recognise our challenge authors.

I'm not recommending removing the Top Answerers list - it's also very useful to see who is answering for a given tag. The Top Askers would simply be another list of 5 users directly below the first list.

Customize the How To Ask box further

We're still getting a bunch of homework questions and interview riddles. I think the phrasing on the How To Ask box could be tweaked to make it abundantly clear that this is not a Q&A site: 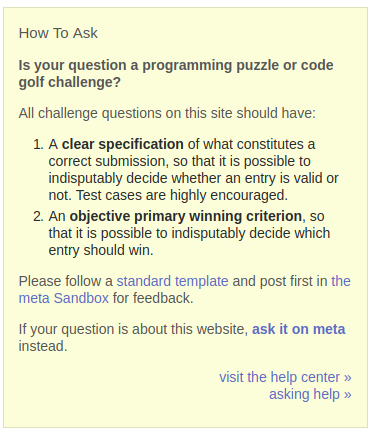 Have a difficulty rating on challenges

I'd love it if the community could vote on challenges based on how difficult they think the challenge is, along with sorting/filtering based on difficulty.

This will likely never get implemented, due to the complexity it adds, but it would really make the site seem more like a "challenge" site, and not just a site with a bunch of challenges.

(I know, difficulty can be highly subjective, but the average rating would still serve as a good estimate)

Create a separate, meta-like site for the sandbox

This could be a site that you could move posts to and from (like meta). Users would first post in the sandbox site, and they would have the capability to move something to the main site by clicking a button. Answers would be disabled(?)

Since we aren't asking questions, it doesn't really make sense that our titles have a minimum length. Let's remove it.

Not the answer you're looking for? Browse other questions tagged discussion site-health .

2
How is "code golf" compatible with "practical"?
3
Can we change the title text of the vote buttons
0
Terminology question -> challenge
0
can "actual problems" be removed from /help/dont-ask?
406
Loopholes that are forbidden by default
84
List of bounties with no deadline
127
How can we help users who are put off by the use of golfing languages?
183
Increase reputation awarded for questions
63
The PPCG Site design is on its way - help us make it awesome!
39
Who are you? Why are you here? And more introspection
See more linked questions

2
Non-puzzle, but more meta-ish questions about code-golf that aren't about using the site
12
What do you think about my ideas for site improvement?
9
Do we want to share our Stack Snippets on meta? If so, using which format?
20
Should questions about challenge-writing be on topic?
56
Stop replacing my tabs with four spaces
51
Can we raise the privilege levels?
63
The PPCG Site design is on its way - help us make it awesome!
40
What should this site be called now that it's getting a design?
11
CM/Mod meetup - what do you want discussed?