Update: The decision has been made to deactivate MathJax on the site. This does not reflect the current votes, as these changed significantly after the decision was made.

We've had MathJax support for 3 days now. While it makes our maths challenges look neat, it has also created two problems:

Especially the latter is a fairly big deal around here. So far, only a few questions have adopted MathJax, and these could still be reverted. However, if we wait any longer, too much content on this site will rely on MathJax to be able to revert MathJax support.

Chris has asked me to get a new community consensus on whether we want to keep MathJax. Apparently, fixing the above issues is not a priority (although it might happen some day).

Do we want MathJax to be deactivated until these issues are fixed?

Yes, deactivate MathJax until these issues are fixed

Keep MathJax, but change the delimiters

Note: We might also be able to get away with changing the delimiter instead (ex. using \$foo\$ instead of $foo$, and similarly \$$ instead of $$), which would give us MathJax and unbroken code blocks for the most part (how often are you going to have \$ happen twice in one code block?). The only reason I'm not posting this as an answer is that I still haven't Done the Science™ on a site with \$ as their delimiter to make sure that this would actually fix the problem.

So I tried it: 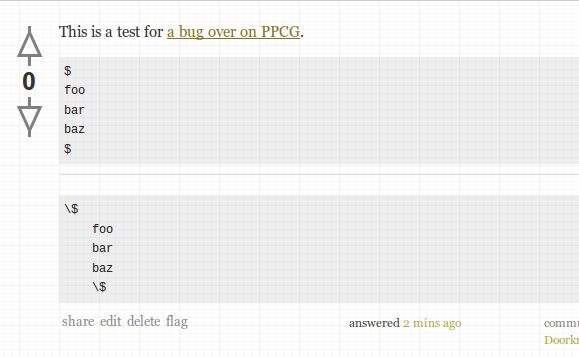 Not the answer you're looking for? Browse other questions tagged discussion status-completed latex .

4
Why there's no latex in PPCG?
22
2016 Moderator Election Q&A - Questionnaire
27
Can we have MathJax back?
19
Revisiting LaTeX
8
Stack Snippets messing with JS?
6
Remove MathJax support on meta
4
Why does Community have an answer here?